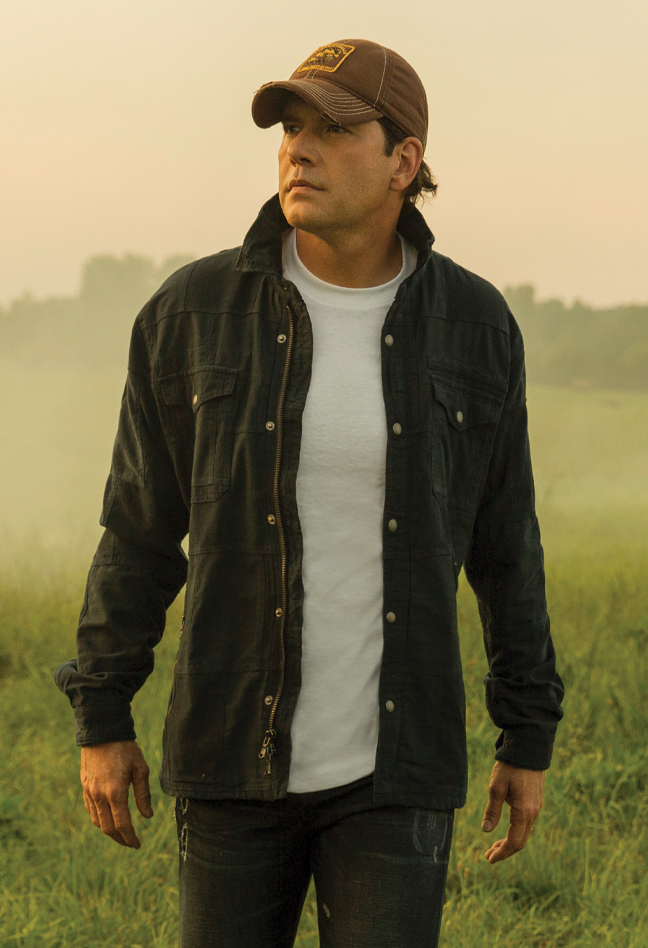 "I love the grit," says Rodney Atkins. "I love getting sawdust on me. I love getting under the hood and getting grease all over: working hard, until your knuckles are busted."
After more than two decades in country music, it's hard to imagine that the Tennessee-born Atkins could still treasure the difficult moments and the arduous process of creating a song from the ground up. But he's just the kind of artist who loves the roots as much as the tree. With six No. 1 hits under his belt, four studio LP's and over 13 million units sold, Atkins is more invested than ever in making honest, authentic records that tell a story and showcase his unique place in the world, which is exactly what he does on his forthcoming fifth LP. But it took a moment, about three years ago, for him to take stock not just of where he'd been, but where he was going.
"I equated it to my bow and arrow moment," Atkins says. "I felt like I needed to stop, take a few steps back. Re-aim. Re-adjust. Get back on target, and to the level I wanted to operate on."
It was a logical moment – in the wake of his first greatest hits compilation, Rodney Atkins Greatest Hits, in 2015, he wanted his next sonic offering to not only push country music forward but stay connected to what had always made it great to begin with. And, in Atkins' eyes, that's songs about the highways of life, family and love. And one true love, in particular. For Atkins, that's his wife Rose Falcon Atkins, to whom he owes so much of his creative reinvention. He credits Rose, a singer and artist herself, with helping him to find his voice again – to re-embracing melodies and the art of singing itself. Her fingerprints, whether lyrically, in a duet or just in spirit, are all over his forthcoming record.
"When I met Rose, the world made sense," Atkins says. And he started to see music in a whole new way, writing songs and searching for ones that explored that beloved grit but were tender, too; songs that could be blasted while driving down the road or after hunting in the field but tailor-made for first kisses and first dances -- songs that will live with his fans at every moment, because they lived with him, too.
"I'm a song mechanic," he says. "I just love working on songs." Whether writing with Rose or a stable of other revered co-writers, digging for the best jewels on Music Row or offering up his own versions of new classics like Jason Isbell's "Cover Me Up," his forthcoming record explores the many sides of an artist who is only moving forward and never too proud to do what makes him a little uncomfortable. From the southern swagger of "What Lonely Looks Like" or the timeless twang of "Caught Up in the Country," that pushes boundaries through a thunderous beat and vocals from the Fisk Jubilee Singers, they all paint a picture of a man who isn’t afraid to show what he loves – be it the country lifestyle or the woman by his side – because that's just who Atkins is. And that, he thinks, is what's most important.
"Authenticity is everything to me," says Atkins, who created much of the album from his own home studio in the hills of Nashville. "It's being honest, being real. Not being afraid to reveal that piece of you. It's about being willing to put it out there." Indeed, there are songs about fitting in and finding a place, about our weaknesses and joys, about watching children grow and about simply letting go. Known for his numerous hits including six chart-topping tracks: "Take A Back Road,” “It’s America,” “Cleaning This Gun (Come On In Boy),” “These Are My People,” “Watching You” and
“If You’re Going Through Hell (Before the Devil Even Knows)" – it's a sonic
progression that will excite and captivate both new fans and ones who have been on
the ride all along.
And that road, for Atkins, has been an enviable one. His last studio LP, Take A
Back Road (produced by Ted Hewitt), yielded his sixth career No. 1 hit and his fastest
- rising single to date with the title track. And his 2006 single, "Watching You," was
named the Number One Song of the Decade by Country Aircheck, an accolade that even
found Atkins himself surprised. But it's on this newest record where Atkins sees the
most accurate reflection of who he is as a man, and as a singer. This time, he focused
on whether or not a song had staying power – beyond just the radio dials. But that's
certainly where they'll be, too. "I believe in these songs," he says. "And that they are
epic."
What lies ahead in 2018 for Rodney Atkins will be more than just new music
and a new record. It will be about watching his newborn baby grow – Rose recently
gave birth to their son, Ryder – and being a father to his teenager, Elijah, as well. And
it will be about playing music for his fans, about continuing his avid support for the
military and for always staying connected to what keeps him caught up in the country.
Getting grease and dirt all over: working hard, until his knuckles are busted, and
cherishing every single second.

This is just a sample…